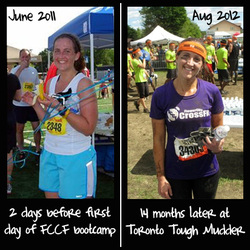 I think many people at our gym today do not realize the amazing progress Anne has made over the last year. She is such an incredible athlete and the nicest person in the world. We are so happy she shared her CrossFit story for our blog.

Anne wrote, "Before I started CrossFit, I thought I was in pretty good shape; I'd played soccer from age 5 through college, and I had fallen in love with running, completing my first half-marathon about a month before joining FCCF. Looking back, my training was extremely one-dimensional. I'd never even picked up a barbell before starting CrossFit. Since starting Bootcamp and then CrossFit at FCCF, I've lost 15 pounds and become much more toned. I didn't do the measurements before I started CrossFit (and wish I had), but my best estimate is that my body fat percentage has dropped by about 10%. I've never felt better!"

How did you find out about CrossFit?
I first found out about CrossFit from a friend who was living and crossfitting in DC. He came to visit and just HAD to go to the gym so I visited FCCF with him. I decided to buy the bootcamp Groupon for FCCF shortly thereafter. Eventually I realized that my college soccer teammate (Michelle) did CrossFit at FCCF. She prompted me to actually use the Groupon...and then I was hooked! I started CrossFit in June of 2011, so I've been doing it for a little over a year. It has been the most challenging, inspiring, and rewarding year of my life!

What has been your greatest moment at CrossFit?
My greatest moment so far was competing at Dewitt in the Hammerhead Western NY competition. The WOD was a 20 minute AMRAP, and Team June Kids came from behind to beat the host team (and everyone else), taking first place! When Aaron started his run first (indicating that we had taken the lead) the entire sideline of FCCF supporters went crazy! Seeing and hearing them react was probably the best moment overall. The four of us stepping up onto the "podium" was pretty great, too. We have worked so hard to get to where we are, and it was great to be successful and prove ourselves.

I am so grateful to have found CrossFit, but more specifically to have found FCCF. Thanks to everyone who makes this such a wonderful, hugely important part of my life!

We are proud to say that Anne will be getting her CrossFit certification in a couple of weeks and will be a new trainer at FCCF! Go Anne! You inspire so many people around you daily!