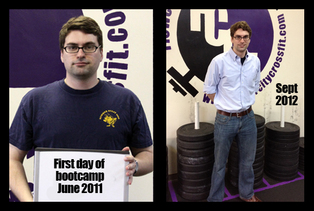 Mike first came to Flower City CrossFit to try a month of boot camp at the end of June 2011.  He had been going to a regular gym off and on and not really getting results for a few years.  He knew he had to do something to jump-start his fitness and health levels, and boot camp seemed like a good start for him.  That first boot camp was a real eye-opener and he realized just how far off the fitness path he had fallen.  With the encouragement of friends, Mike continued to go to boot camp and hasn't looked back since.  He converted over to CrossFit at the end of October 2011.  In May 2012, Mike participated in the healthy eating challenge at Flower City CrossFit, where he dropped almost 30 pounds in two months and won the challenge!  This is where he turned a real corner with his healthy eating which now matched his ever increasing fitness and endurance.  This summer, Mike competed in his first 5K with his FCCF friends.

How did you learn about Flower City CrossFit?
I first became aware of Flower City CrossFit when I saw a friend on Facebook tagged in some photos.  I had never heard of CrossFit, but I was intrigued by the pictures of him running around outside, flipping tires, pushing sleds and using sledgehammers.  It seemed like a much more interesting workout than just going to the gym and being bored, but I didn't really act on it.  Then a few months later I saw a Living Social coupon for Boot Camp classes and sent my friend an email to ask if it was a similar thing.  It turned out it was for Flower City, and he encouraged me to give it a go.  So I took the plunge, deciding that it was time to finally try to get in shape and lose some weight.

What do you like best about Flower City CrossFit?
I have to say the community.  The trainers are great and really supportive. They work with everyone to make sure that you're able to do the workouts, even if they're scaled or modified.  And the people that go to the gym are amazing.  Everyone cheers on everyone else, and there's a very friendly atmosphere.  Even times when I've been really slow on a workout or felt like I've bitten off more than I could chew, people are right there with you,  encouraging you to finish, with no judgement.  I don't think I would have ever lasted at a place that wasn't so supportive.

What has been your greatest moment at CrossFit?
It's hard to choose just one!  Probably the biggest personal moment came when I ran my first 5k in July 2012.  It was almost exactly a year after my first boot camp class, and I had never run that distance before in my life.  But with no training other than CrossFit, I ran the whole way and completed it!  That race demonstrated that CrossFit had improved not only my body, but my mental state as well.  Something that had seemed impossible just a year ago was something that I realized I could do.

Thanks for sharing your story Mike!