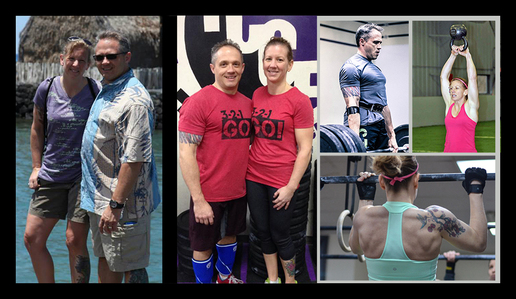 Thanks to Tricia for writing this!

We HAD both been very active individuals earlier in life. But life sometimes settles in and fitness/eating properly suffers. We both participated in Karate and softball and were active “gym rats.”  Phil had been powerlifting and body building for 25 plus years. He had a few podium finishes for his powerlifting as well as participated and placed well in karate tournaments. His last “fitness” endeavor was All Natural Body Building in 2001, placing 1st in Rochester and 3rd in Buffalo.

We fell off the wagon after I had a motorcycle accident in 2002, leaving me to recover from multiple fractures and dealing with the permanent internal steel plates/screws.

Fast forward to November 2013. Phil’s blood pressure was pre-hypertensive, he had elevated cholesterol levels and was overweight. I was heavier than I felt comfortable with and had several physical limitations due to all of the steel plates/screws from the accident throughout my body (pulverized knee, broken tib/fib/femur/humorous to name a few).  I was told I should be ok without the ability to run and should be happy I could walk as well as I could. That wasn’t good enough for me. I taught myself to run again and wanted to be stronger. However, pain was a big hindrance sometimes as well as muscle weakness. Getting up and getting to the gym at 6am just wasn’t on our priority list, so it was imperative that we find something that we could engage in that would get us back on track.

A couple of our friends (The Ignizio’s) had been posting about CrossFit and they looked great. Jen suggested checking out a bootcamp class and also referenced Groupon so I checked it out.

I saw one for FCCF and signed us up. The first week was a show stopper; it really opened our eyes as to how out of shape we were. I was afraid to jump, and jumping up on a 12” box scared the crap out of me, let alone jumping over a PVC pipe.  My right arm was much weaker than the left and breaking through the pain threshold was a necessity to moving forward with the strength training.

After one month, we were hooked and signed up for month two. We then went on a cruise and when we returned, we tried a bootcamp at another box. We knew we wanted to move up to CrossFit, but due to the investment, we wanted to make sure that we were choosing the best location.  We checked out a few boxes; however at that point FCCF was between home and work and it had already begun to “feel like home” due to the atmosphere and wonderful members.  We made the plunge and began CrossFit in February 2013.

Last summer, we participated in WODmageddon (an FCCF competition for members) and then participated in our first food and fitness challenge incorporating Paleo into our vocabulary. This is when things dramatically changed. We dropped fat like crazy and physically felt better than ever.

Fast forward over a year later to today. Phil is no longer pre-hypertensive, his cholesterol is perfect and he weight is spot on!  I jump on the 20” boxes and do un-banded pull-ups as well as hand stand push-ups.  My orthopedic doctor shakes his head in amazement when he hears what I have been up to.  Phil and I also took the Level 1 CrossFit Trainers course and received our Level 1 CrossFit Trainer Certificate.  We now train bootcamp classes and are loving every minute of it!  To have an opportunity to make a difference for people at such a vital turning point in their fitness level is PRICELESS!