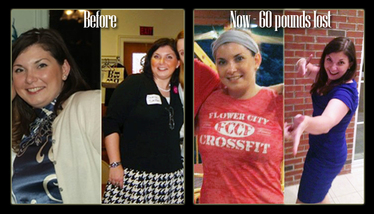 A special thank you to Jessica for writing her success story.  You go girl!

It’s Official. Over the last 24 months, I’ve lost 60 lbs. After a three year bout with self-diagnosed “chubby newlywed syndrome”, I knew something had to be done. I made a point to sign up and train for a local 8k charity race as a starting point. Once I realized how much better I felt, I started playing soccer again! It wasn’t until I hit the dreaded weight loss plateau that I felt I needed to do more to push myself. It was a simple Groupon offer and the motivation of a CrossFitter named Morgan Howe that led me to the doors of Flower City CrossFit. I recall thinking, “I have no clue what this CrossFit stuff is about, but I’ll give it a whirl.” A whirl is what it has been.

By the second Bootcamp class, I was hooked. CrossFit is about targeting, scaling, and motivating through regular milestones in training. This is not an exclusive club but rather an all-inclusive approach to being healthy. That simple Groupon opened the door to widely varied exercise routines, clean eating, and a great group of people. CrossFit has become a major part of my life. It has transformed by body through exercise but also through clean eating, as I’ve adopted a hybrid Zone/Paleo diet. In the 18 months prior to joining “the CrossFit box,” I lost 30 pounds.  In the last 6 months since joining CrossFit, I’ve continued my weight loss, dropping another 30 pounds.

What have you learned about yourself through this journey?
What I have learned through my CrossFit journey is that I am strong, both physically and mentally. With CrossFit, you can turn your body into what you want it to be, rather than settling on what it is. I can now do more in both my personal and professional life with more energy than I could ever have imagined.

What has been your greatest moment at CrossFit?
My greatest moment at CrossFit was when I realized I CAN vs. I CAN’T. We had a WOD event at the gym which consisted of several double-unders (jumping roping in which the rope passes beneath your feet twice within a single jump). Prior to this event, I was super new and a novice to these. But during this event I was able to consistently do 30 in a row. I beamed. I had done it. I knew from then forward that nothing is impossible.

What do you like most about CrossFit?
What I like most about CrossFit is the sense of community. Even if you don’t think you can finish a workout, everyone else at the gym cheers you on and encourages you to finish, no matter what. Even if you’ve had a tough day, there’s always someone willing to listen. CrossFitters are supportive of one another. This support and community has led to many personal friendships, for which I’m very grateful.

Thanks to everyone at Flower City Crossfit for your support, encouragement, and motivation. And a special thank you to Morgan Howe. Without you, I don’t think I would have tried CrossFit. It has changed my life. Thank you Morgan.